UPDATE 4/9/2021: Comics Tuesdays and Thursdays for the next few weeks! I need to catch up on a few things!
Also Defenders blog post!

UPDATE 4/14/21: SHORT VERSION: Plot-Confused? Ask in the Reactions Forums thread for the confusing comic's date. I'll try to be clearer in the future. ALSO Thursday's comic in now bumper to Friday (April 16th)

LONG VERSION: ( I'll move this to the news section soon.)  Story Confusion, Ref Links, and The Recap!
Hey all! Last comic's Reactions Forum thread reminded me of something I lose sight of from time to time, and that is just how complicated my stories are. Immortal King suffers from this perhaps more than any other. Big thanks to GUIGUI for clarifications in that thread.

In most stories the reference links beneath a strip are there to put the subject in a larger context and let you dive deeper if you wish. Everything you need to know should be contained in the story, and if I notice otherwise I'll directly recap what's needed to know in the strip.

This one feels trickier. Like there is SO MUCH referenced material, it feels needed to understand whats going on. But any attempts to recap on such a massive scale would be a huge endevour, and an annoying word dump (which I never do :P )

In my mind the Liberliganus subsections were a self-contained story of a family surrounding the creation and evolution of the Book of E-ville. Did you need to know who Quint's moon goddess was in the bigger context of the Sluggyverse? No. But I think it's cooler if you do. Simularly, 'Roomies' will be the story of a couple of irredeemably despicable jackasses trapped together for way-too-long, but with the reflinks you will see where these comics intersect with the Sluggy Freelance timeline, and will be given additional timeline information. All the questions, like "Why rip pages from the book instead of using the spelll of binding/inbinding" "who is Ozzid?" and "why was there two versions of Kozoaku (big version and lil' bug version) at the same time in the ref links?" These will all be answered in upcoing comics. If you do deep reference dives you should be able to work out the last made-up question, but all should be answered in time without the need of a ref-link dive.

Having said all that, I feel your pain. I will try to make things clearer and simpler as I go forward in Roomies, while simultaniouly underwstanding it won't be enough for everyone.

Please remember the Reactions Forums can be used to express confusion and ask questions about the current strip that don't involve speculaton.  And I'll remember I need to do my job better. :) Onward and Sideways!

ALSO: In rethinking the upcoming strips for clarity, the Thursday Strip (15th) will be bumped to Friday (April 16th). Still two strips a week, but the extra day will produce a better result. 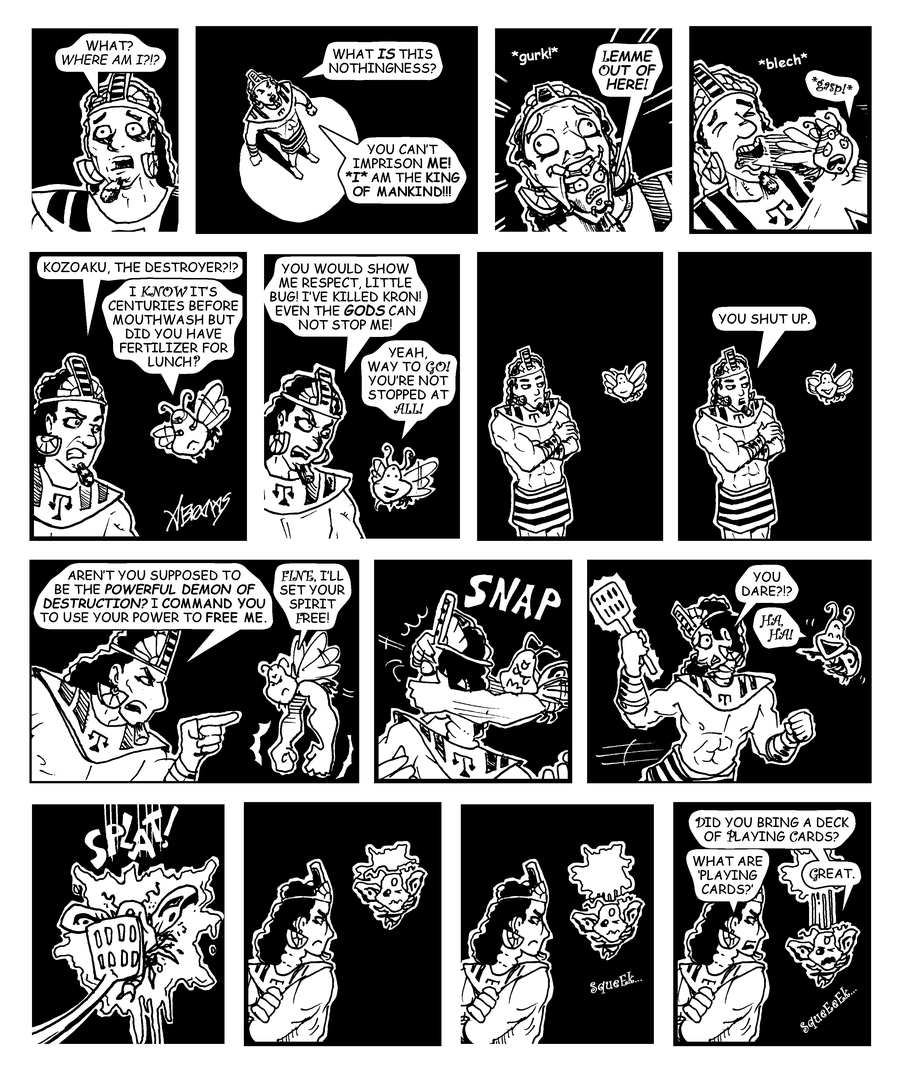